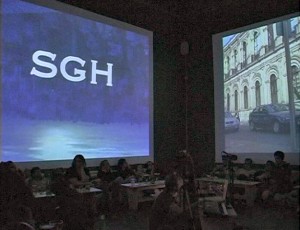 City Salvage was a collaborative film/sound performance at Monkytown, a 4-wall projection venue in Brooklyn, NY.

Film-makers Lynne Sachs and Mark Street invited Bosko Blagojevic and myself to compose a live audio response to their multi-screen films, as part of an ongoing collaborative series they call The XY Chromosome Project.

Lynne and Mark’s films were handheld explorations of various urban environments, so we focused our performance on individual sonic episodes which were slowly uncovered and hidden as the evening progressed.

The database-like structure of Italo Calvino’s “Invisible Cities” was an organizing metaphor for these episodes. Some were based on field-recordings, manipulated live in MAX/MSP while others used video analysis of the film frames to produce a synesthetic mirroring of the screen.