In 2008 I made circuit-bent Buddhist chant boxes to be given to guests at a NYFA fundraising event. I continue to experiment with them as instruments, gifts, and sculptural objects. (The ongoing Witnesses series is based on these.) 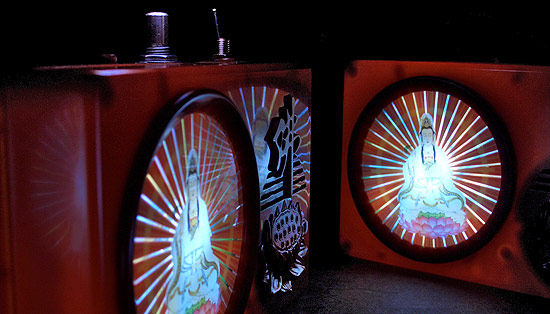 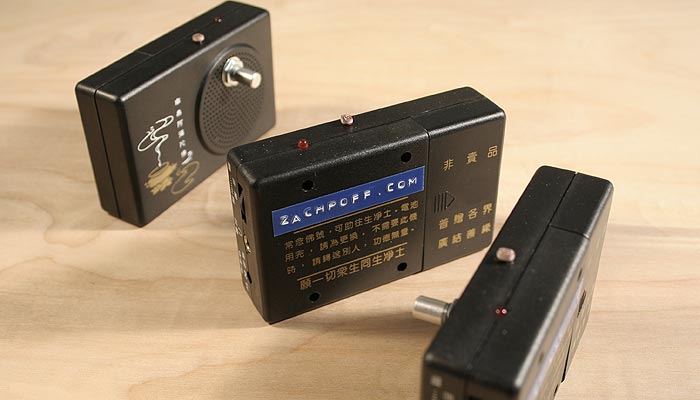 “Enchanted” is a series of modified Buddhist “chant boxes”. Each one begins life as a digital sound player (variously called a “chanting player”, “buddha box”, or “buddhist jukebox”). They are usually given away in Chinese temples to assist in meditation. Short musical phrases are encoded on a microchip and played continuously when the player is turned on. Some have a track-switch button (like an old 8-track player) and some have only a volume knob.

I am interested in how the technology within these boxes guides the perception of their intent. At first blush, a digital device that “prays for you” seems a bit Orwellian but Buddhist chanting is not prayer (as in mortals communicating with their gods). It is a blend of oral tradition and meditation: a way of teaching religious texts where the repetition of the message encourages a spiritual state harmonious with the meaning of the text itself.

I have “circuit-bent” each box to enable radical alteration of pitch. Individual notes can be transformed into slowly-shifting textures or the entire phrase can be condensed into an instant. Although the message of the religious text is unavailable for English speakers, the formal qualities of the repeated sound are heightened. When the pitch is lowered enough, the supersonic rate of digital sampling becomes an audible tone. When lowered even more it becomes a rhythmic ticking as each sample is pulled slowly from memory and fed to the tiny speaker.

Pitch can be controlled in 2 ways: 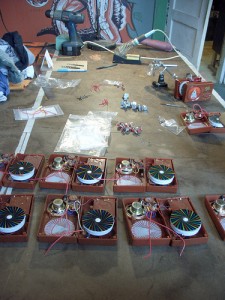 Get a chant box from a local Buddhist temple or buy one from Deal Extreme.

Then go out and get yourself a copy of Handmade Electronic Music by Nic Collins. It’s a thorough guide to DIY electronics, liberally peppered with art-contextual blurbs that will have you running to wikipedia with your soldering iron in your other hand. (see Chapter 12: “Tickle the Clock”)