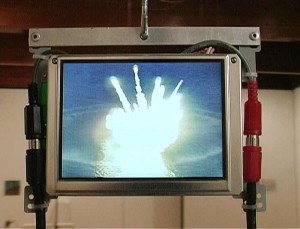 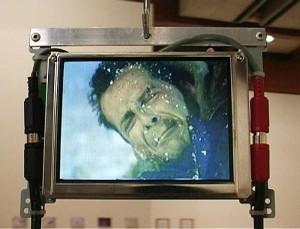 Two small LCD displays are suspended a few feet apart. One plays all of the explosions from the Bruce Willis “Die Hard” films, assembled in a continuous loop. The other shows Bruce Willis contorting in the reflected light as he reacts to each explosion.

Conspicuously silent, the pyrotechnic symphony loses its grandeur while the slowed catalog of the actor’s reactions makes his struggle to emote into a larger-than-life ordeal.

As seen in MEDIAWORKS at the Perimeter Gallery in Belfast Maine, 2007. MEDIAWORKS was a group exhibition of work which recomposes “meaning” by reworking the context of media artifacts, and then explores the collateral metaphors created in the process. It featured work by N.B.Aldrich and the Marswalkers and myself, as well as texts by Sharon Hayes, Margaretha Haughwout, Jon Ippolito, Chris Mann, Read Mercer Schuchardt, and Liz Kelton Sheehan.