Fast Slow Radio presents 22 sonic impressions from locations around the globe. It was commissioned by Radio Art Zone, a 100-day radio art station for Esch2022 (EU Capitol of Culture), which was broadcast in Luxembourg by Radio ARA on 87.8 FM and around the world via online broadcast partners.

Each 60 minute section is an “audio time-lapse” combining thousands of chronological audio samples collected during a 24hr period. Fast Slow Radio combines the glacial pacing of Norwegian “Sakte-TV” with the constant change of Luc Ferrari’s “Presque rien No. 1”.

When long recordings are time-compressed, slow changes become audible, like the hidden movement of plants revealed by a time-lapse film. This way of listening helps me appreciate the more-than-human patterns around me. When listening at this speed, nothing is static: The “constant” hum of the city changes timbre as rush-hour approaches. Underwater recordings reveal the diurnal cycles of insects or the ferry schedules of a metropolis. In the forest, animal voices mark their shifting territories against a backdrop of wind and water that are always present but always in flux. 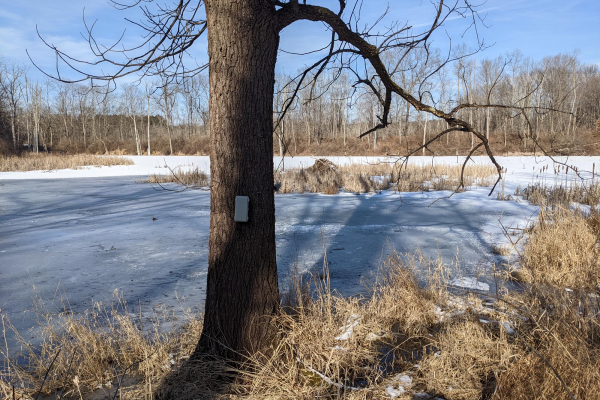 The first time-lapse recording is from the edge of a pond, about 2 hours north of New York City, in a secluded residential area with very little car traffic. It was recorded on a windy day in late winter 2022. The recording starts at 9AM. The pond is covered in ice. As night falls we can hear a beaver foraging in the forest. In the 2nd hour we’ll hear the same location in Springtime. 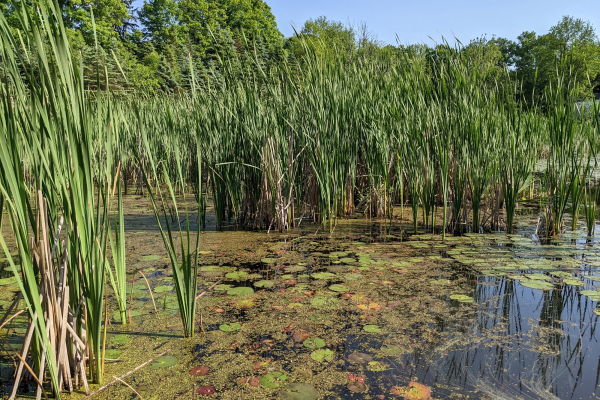 This is the second recording from the edge of a pond, about 2 hours north of New York City, in a secluded residential area with very little car traffic. This recording is from late Spring in 2022. I hear some of the same species as the winter recording, but a lot has changed. frog species dominate the night-time hours. The recording starts at 9AM. 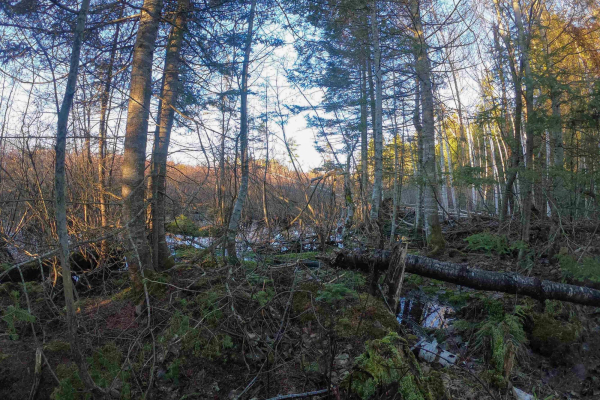 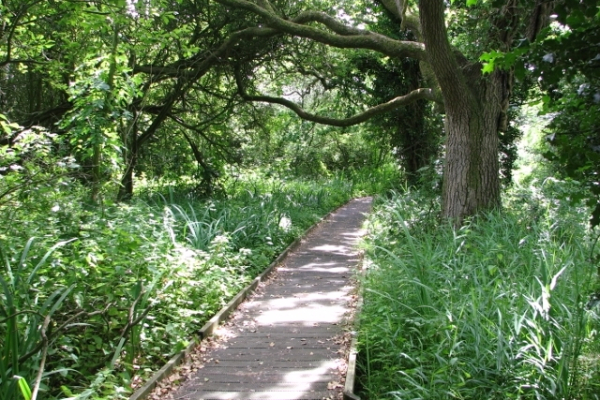 In this hour we’ll hear a recording from the Wheatfen Nature Reserve, a protected wetland near Norwich, England that provides habitat for a huge range of species. Sound artist and educator Martin Scaiff installed an audio livestream at Wheatfen that you can hear on the Locus Sonus sound map (“Norfolk Broads”). I captured this recording from the stream in winter 2022. It starts at 6AM. 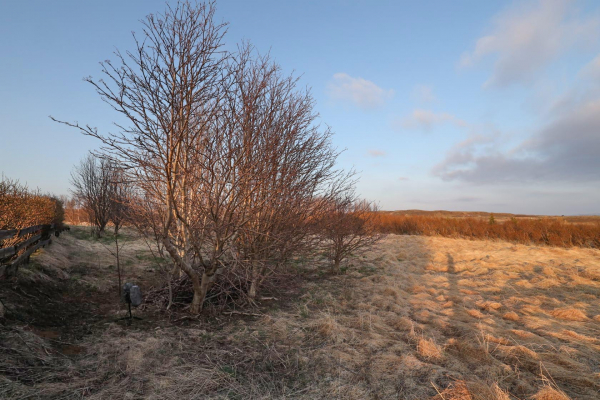 A Field in West Iceland

In this hour we’ll hear a recording from West Iceland, contributed by field-recordist Magnús Bergsson. In the warmer months, Iceland is a major destination for migratory birds, and his recording really captures the richness of the biophony. The bleating of the Common Snipe is one of the most enigmatic bird sounds I can think of. This recording is from April 2022 and starts at 4AM.
Photo: Magnús Bergsson 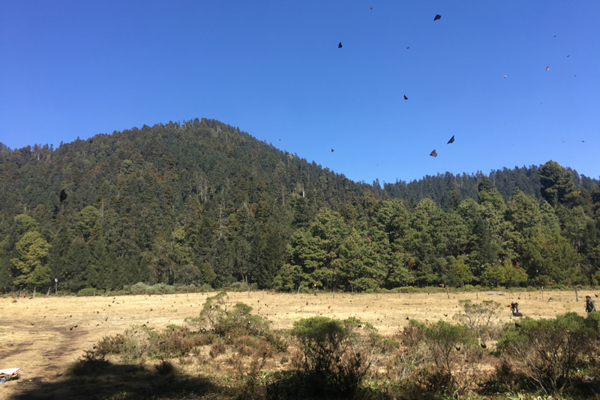 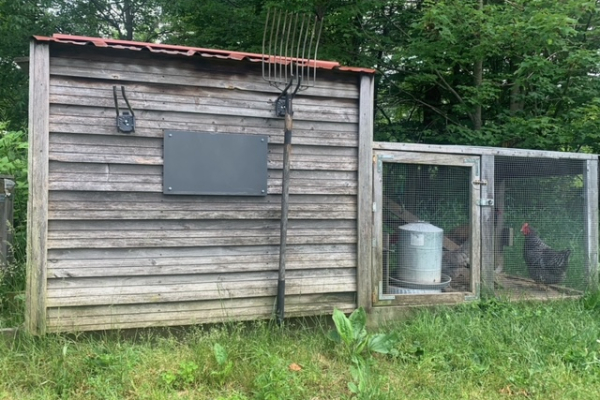 A Chicken Coop in Binghamton, NY

In the last hour we heard a lot of roosters in the distance. So in this hour we’ll hear hens, very, very close. This is a recording from inside a backyard chicken coop in Binghamton, NY. It was recorded by Monteith Mccollum, an artist who works in film, sound, and sculpture. I love the combination of improvised percussion and voice here, and the way it expresses the social dynamics inside the coop. We can hear the outside as well, filtering through the walls. It was recorded in March 2022 and begins at 1pm.
Photo: Monteith Mccollum 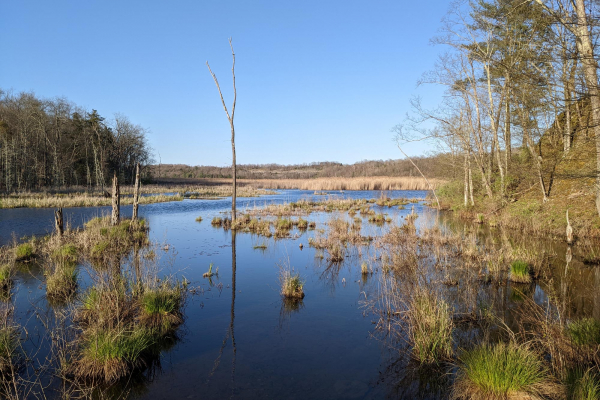 In this hour we’ll hear a recording from a hillside overlooking The Great Vly in Saugerties, NY. The Great Vly is a tiny but charming swamp sandwiched between a major highway and a cement plant near the banks of the Hudson River. This was recorded on a windy day in April 2022. Despite the constant drone of car traffic, the underbrush sounds alive with foraging creatures and the waterfowl and spring peeper tree frogs make a lively racket. It starts at noon. 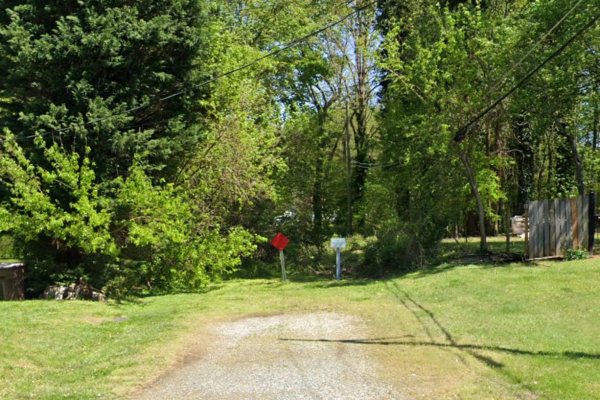 In this hour we’ll hear a recording from 2014 by Patrick Perdue, an audio editor and veteran streamer on the Locus Sonus sound map. This was recorded in the US state of North Carolina, in a neighborhood where we can hear a lot of overlap between the animal and human populations. We hear the sounds of people shaping their environment: air conditioners, lawnmowers, and construction sounds trade off with the biophony. It starts at 7am. 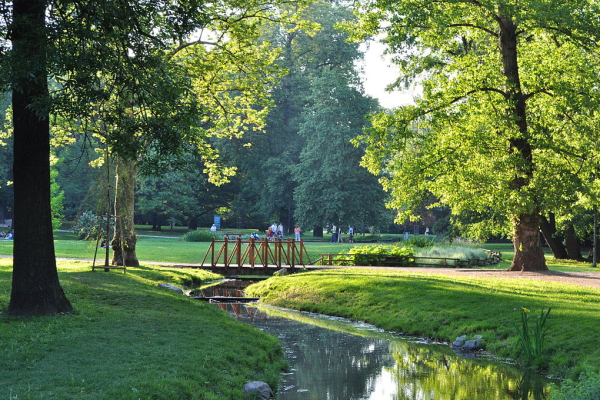 This is a recording from Luzanky Park in the city of Brno in the Czech republic. I captured this from an audio live stream by Udo Noll, who also created the Radio Aporee sound map and radio.earth livestream project. Luzanky is the largest municipal park in the city and has a distinctly urban sound. I love how the focus of this recording is always changing as different visitors pass by the microphones. Overnight the soundscape changes completely, dominated by the wash of distant traffic and the sporadic shouts of wandering humans. The recording starts at 3:30 AM.
Photo: Tomáš Šenkyřík 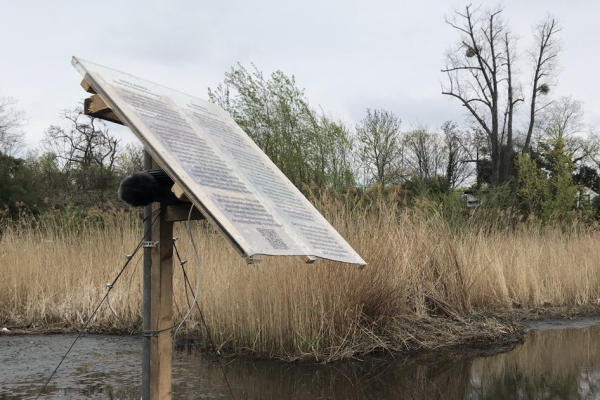 This recording is from the Floating University site at the rainwater retention pool of Berlin’s former Tempelhof airport. The airport closed in 2008 and Floating University was created as an urban laboratory for engaging with the man-made environment reclaimed by nature. It’s a physical structure and an association dedicated to taking care of the site and engaging with the public. I captured this recording in May 2022 from their live stream on the Locus Sonus sound map. (Stream by Archipel Stations Community Radio.) Like Luzanky Park in Brno, this is a public space of gathering, an oasis for wildlife and a nexus of culture. The recording begins at 1pm.
Photo: Archipel 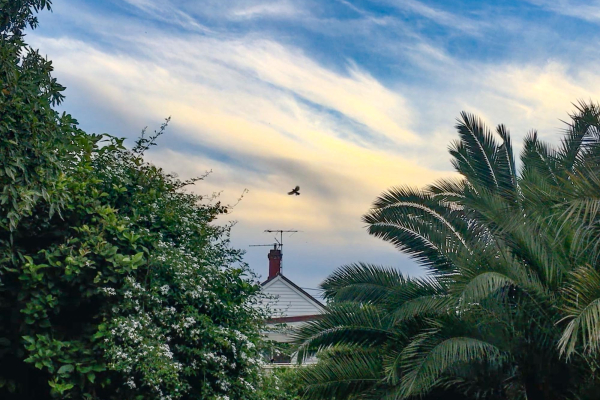 This recording is from Wurundjeri Country (Footscray, Melbourne, Australia). As a suburb of a major city it’s a collision of different daily cycles. We hear the ebb and flow of traffic and commuter trains, chickens in a nearby yard, human conversations, and the unique wildlife of Australia. This recording was contributed by producer and broadcaster Rebecca Fary. It begins at 2pm.
Photo: Rebecca Fary 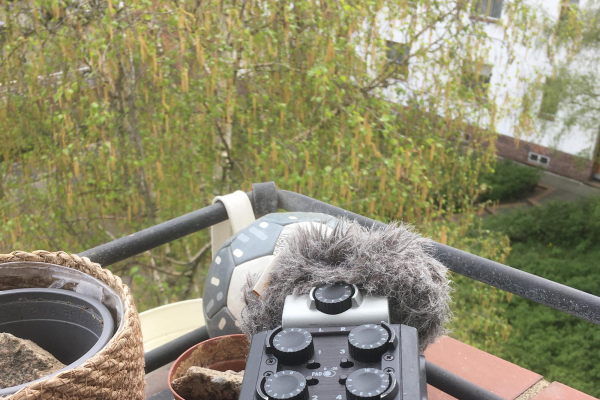 This recording was made from an apartment balcony in Berlin, overlooking a courtyard and street-corner. It was contributed by film-maker and sound artist Zach Hart. Each street-corner has its own sonic character and I’m particularly interested in the echoes that give this recording a sense of containment – a refuge of smaller sounds within the larger city. It was recorded in April 2022 and begins at 2pm.
Photo: Zach Hart 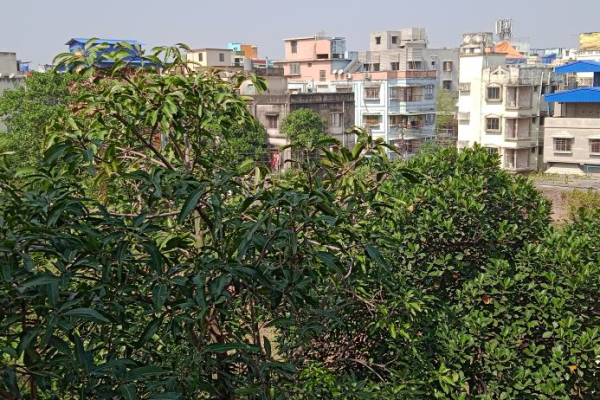 This is a recording from a balcony in the Survey Park neighborhood in Kolkata, India. It was captured from the livestream maintained by Sukanta Majumdar, a sound-designer and field-recordist. I’m struck by the dynamics of this soundscape, from urban construction to near-silent night-time insects. It was recorded in April 2022 and begins at 4am.
Photo: Sukanta Majumdar 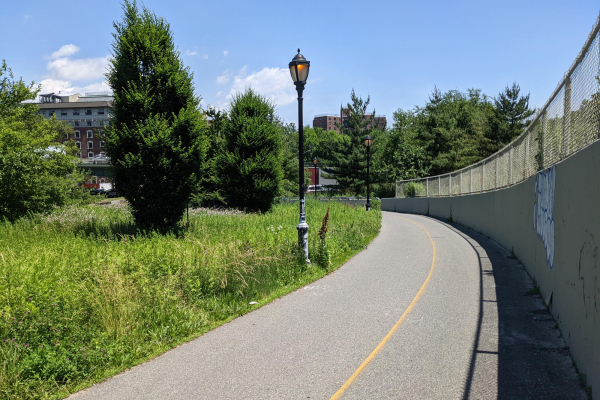 This is a recording of the eastern entrance to the Manhattan Bridge, one of several NYC bridges that connect Manhattan to Brooklyn. The recorder is in a small green oasis, bounded by the curve of a bicycle line as it climbs to meet the roadway. The soundscape is dominated by the 24hr sounds of subway traffic, cars, and trucks. But the dawn chorus peaks through the noise, and a hardy mockingbird raises its voice above it all. It was recorded in April 2022 and begins at 4pm. 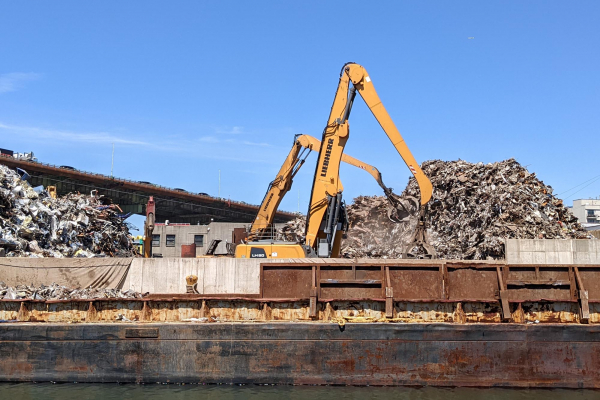 This is a recording of a metal scrapyard in Brooklyn, NY in May 2022. Two cranes are sorting through huge piles of metal to fill a recycling barge. The recorder is positioned across a canal and also captures the sound of an elevated highway, a train line, and a cement plant. The din of twisting metal stops when the workday ends, and the more subtle nuances of the city soundscape come through overnight. The recording starts at 10am. 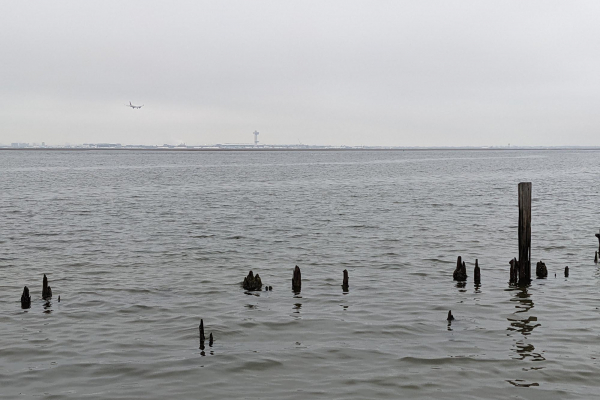 This is a recording from March 2022 on a beach near JFK airport in NYC. We can hear the constant rhythm of the planes, distant subway traffic, and the more subtle beachfront sounds of water, wind, and birds inbetween. The soundscape changes during the few overnight hours when the air traffic stops. The recording begins at 6:30 pm. 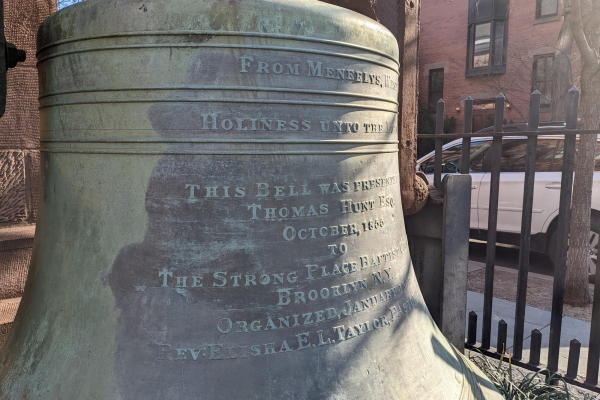 This is a contact microphone recording of a church bell in Brooklyn, NY that was moved outside for display when the church was converted to apartments. I’m fascinated by the way bells continue to ring in sympathy with their environment, and I can hear this one resonating with the weather, birds, pedestrians, and the low rumble of the city itself. It was recorded in April 2022 and begins at noon. 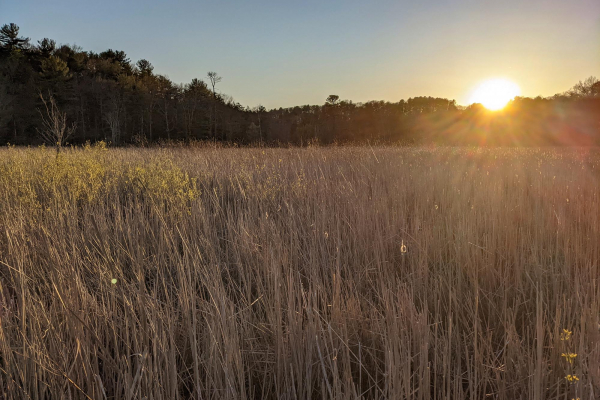 This is a recording of the RamsHorn-Livingston Sanctuary in Catskill, NY. It’s a meandering tidal swamp on the edge of the Hudson river with tall grasses and marsh vegetation. The recorder was placed in a forested area with thick underbrush on the edge of the swamp. The wind animates the trees and brush in the immediate foreground, along with birds and amphibians. These are set off from a background of human habitation: car traffic, trains along the riverside, and churchbells from the nearby town. It was recorded in April 2022 and begins at 7pm. 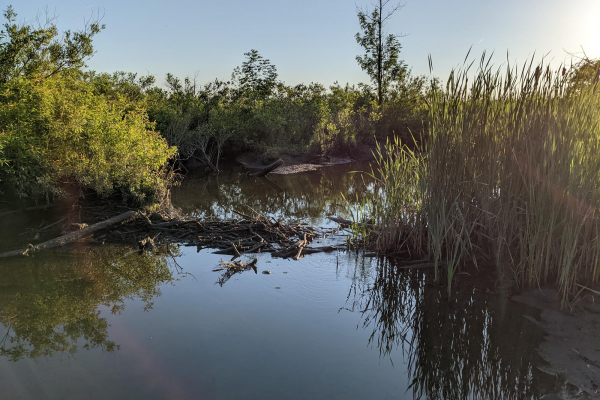 This is a recording from the Tivoli Bays Wildlife Management Area, the best examples of freshwater intertidal marsh and swamp habitats in the Hudson River estuary. The recorder was placed along a narrow dirt road that floods at high tide, surrounded by snaking channels of tall marsh grass. A train line passes nearby, but there isn’t much other anthropogenic noise besides aircraft and distant traffic. This was recorded on a holiday weekend in May 2022. There were fireworks, occasional hikers and boaters, and lots of frogs, marsh birds, and aquatic mammals. It starts at 8:30pm. 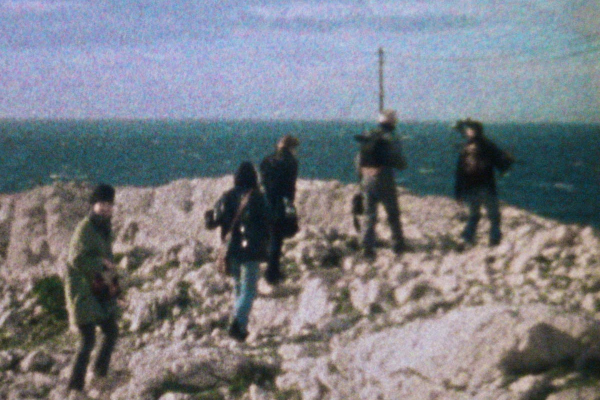 This is a recording from the Frioul islands in Calanques National Park near Marseille in France. I captured it in May 2022 from the livestream on the Locus Sonus sound map (“Marseille – Frioul”) established by the Acoustic Commons network. Compared to Tivoli Bays, this recording has a much larger scale and sense of distance. It’s dominated at first by a strong coastal wind that buffets the mics and makes everything around them sing. Later the soundscape is dominated by a colony of sea birds in the distance before the wind comes back. The recording starts at 2pm.
Photo: Acoustic Commons network 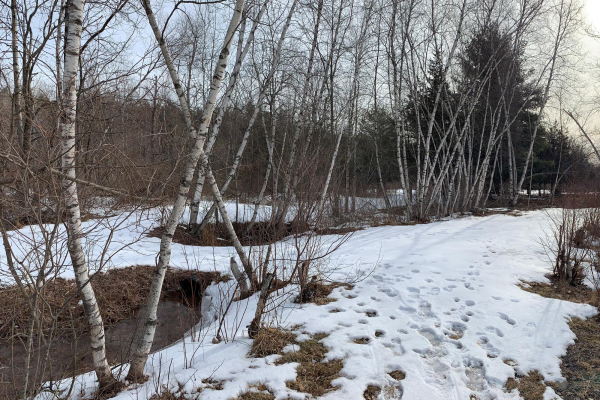 This is a recording of a snowy winter day in January 2022 at Wave Farm, in Acra NY. It was captured from the livestream installed by Soundcamp as a test site for the Acoustic Commons network. I know this area well because my Pond Station project is located there too. Visually, it’s a secluded forest atmosphere, but the noise from a nearby highway tends to dominate the soundscape. In this recording, heavy wind, freezing rain, and snow take center stage, activating the space in a different way. It starts at 11am.

World Listening Day is an annual event that engages and expands the global community in varied practices and concerns of listening and field recording. In addition to soundwalks and events around the world, there was an online stream of live and pre-recorded soundworks, including a Fast Slow Radio time-lapse. 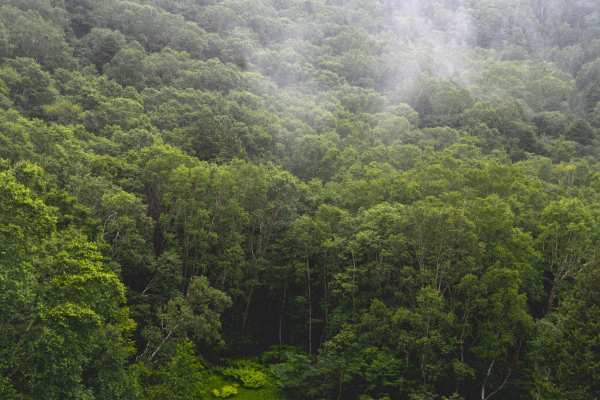 For World Listening Day I recorded a stream from Cyberforest program at the University of Tokyo. They have been streaming and archiving audio from Japanese forests since 1997. I captured 24 hrs from the “Otanomo” stream at the Shinsu University Nature Education Garden near Nagano. It’s a mountaintop park that brings people into contact with the forested landscape. The WLD theme for 2022 is “listening across boundaries.” During the COVID pandemic shutdowns, boundaries seemed everywhere, but environmental live-streams like the Cyberforest project linked me with the world outside those limitations.
Photo: Cyberforest, University of Tokyo