Parallel Rhetoric: Coming and Going is an installation that combines the Inaugural and Farewell speeches of former U.S. Presidents. Custom software edits the audio streams in real-time to seamlessly conjoin election-year promises and farewell reflections into the same apparent sentence.

This piece extends the investigation of public speech that I began in 2005 with Parallel Rhetoric: 2001 + 2005. Presidents Johnson, Carter, and Reagan each saw massive changes during their tenure. Johnson was thrust into office unexpectedly and oversaw huge changes in the social and political landscape. Carter recognized the collapse of 1960’s ideals but was unable to convince the masses that he could reconcile idealism with economic recovery in the 1970’s. Reagan increased executive-branch authority to unprecedented levels while pointing his finger at government as the root of America’s problems, effectively silencing Carter’s questioning of the country’s ethos. 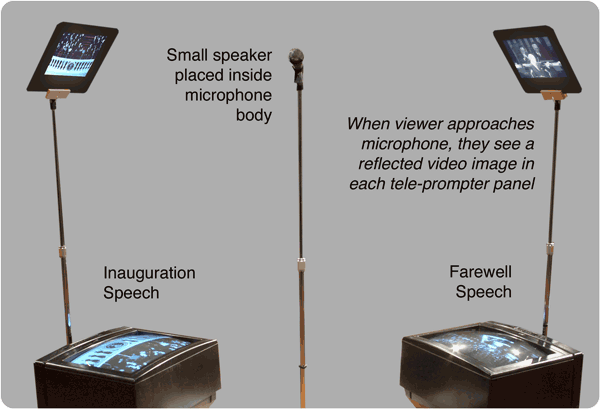 Videos of Presidential inaugurations and farewell addresses are reflected in a pair of plexiglass teleprompters (Inauguration on the left, Farewell on the right).

A single modified microphone is placed between each pair. It is re-wired to act as a speaker, giving voice to one speech or the other but never both. Whenever a moment of mutual silence occurs, the sound inaudibly switches from one speech to the other without breaking the rhythm of the words (combining election-year promises with farewell reflections in the same virtual sentence). The video tracks remain uncut, so aural/visual synchronicity bounces left and right with each rupture of meaning, leaving one head continuously mouthing in silence.

Through this technique, new speeches emerge from the remnants of the old and intentions vanish into the years between the recordings. The rhetorical form of public speaking remains, filling the containers of the original events with a new sort of spectacle.