Pond Station is a modular platform for monitoring the hidden activity of a freshwater pond. It has been transmitting since May 2015 when it was commissioned as a long-term sculpture at Wave Farm in Acra, NY. It floats on the water’s surface, broadcasting underwater sounds through a live radio link. It operates from dawn to evening every day, using solar-charged internal batteries. Pond Station’s receiver is located in the Wave Farm radio studio where resident artists and broadcasters on WGXC FM can experience the pond’s natural sounds or remix and interpret them. International audiences are invited to do the same via the live web stream below.

You can record the stream with VLC. I wrote a guide to help you. 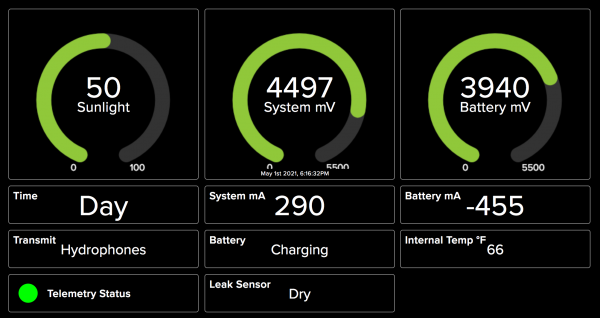 Pond Station made its first broadcast on May 2, 2015 during REVEIL, a 24hr live broadcast of the sounds of daybreak from all over the world organized by Maria Papadomanolaki and Grant Smith. Listen to a great condensed overview on framework radio #509.

At sunrise, Pond Station’s hydrophones (underwater microphones) reveal a photosynthetic chorus of bubbling as plants begin to produce oxygen. Insect, fish and frog vocalizations continue all day, combined with the traces of sounds in the air that excite the water too (like passing cars, singing insects or humans). Rain on the pond surface creates a dense cloud of high-frequency detail, like the coals in a cooling campfire. In the winter, life in the pond slows down to near silence as the water ices over, but the ice may crackle and hiss during its daily expansion and contraction.

May 2015: Early morning. Rhythmic sounds stop after a car passes, then restart with a different tempo.

June 2015: Night on the pond. Very quiet except for the frogs.

Pond Station’s physical form is inspired by the utilitarian beauty of remote research stations and space probes. Its exterior is designed to withstand high winds and rain while keeping its electronics dry and its antenna focused on the receiver. The project began in 2013 as Pond FM (with N.B.Aldrich), an installation that transmitted the underwater sounds of the pond over short-range FM radio. Pond Station is based on the same custom hydrophones but the rest of the system has been replaced with a more rugged and upgradable platform. The audio is transmitted over a low-power digital radio link using custom-built antennas to cover the 350ft distance between the pond and the receiver. An Arduino microcontroller manages the transmission schedule and power distribution to keep the station on the air regardless of weather. A telemetry radio transmits updates about the internal electronics and local environmental data, which are archived for future analysis. (The environmental data also helps contextualize the sounds since sunlight is the primary driver of the pond’s ecosystem.) The web stream is powered by a Raspberry Pi and the Locus Sonus streaming server and sound map.

In 2016 Pond Station was upgraded to include light-based sensors which reveal some of the insect “night life” of the pond and provide opportunities for light-based interaction with performers.

Each May since 2015, Pond Station has been included in REVEIL 24hr live stream event that follows the sounds of daybreak around the world.

Pond Station was featured in Alex Nathanson’s 2021 book A History of Solar Power Art and Design.

Pond Station was mentioned in the July 2021 issue of The Wire magazine, in Kurt Gottschalk’s profile on Wave Farm / WGXC.

In 2021 I discussed Pond Station with Darren Copeland from NAISA for their Making Waves podcast on WGXC.

In 2021 I wrote an essay about Pond Station, Acknowledging Other Ears for NEW SUNS: Listening with Artists, an online publication created by the non-profit United States Artists.

On October 2019 I presented Pond Station during a panel discussion in support of Alan Licht’s new book Sound Art Revisited.

In 2018 Pond Station was included in Carlo Patrão’s Botanical Rhythms: A Field Guide to Plant Music on Sounding Out.

In 2017, radio artist Carlo Patrão included Pond Station in an article for Good Things We Learn From Plants, an artist magazine edited by Victoria Stocker.

Pond Station was included in Knut Aufermann and Sarah Washington’s Radiaphiles broadcast at Documenta 14 (2017). It also features Jeffrey Lependorf’s “Pond Station Duet” and Ralph Lewis’s spoken word performance recorded from under the water. You can read more about the series here: http://mobile-radio.net/?p=2809

I participated in an online panel on May 11 2016 for the Balance-Unbalance 2016 Conference in Manizales, Colombia. Our panel discussed the potential for a worldwide open microphone network to become a resource for artists, researchers and activists working around acoustics and ecology. Youtube archive here.

In 2016 the Australian national broadcaster ABC profiled Wave Farm for their Soundproof program. They took a detailed listen to the installations on the property, including clips from my Pond Station installation.

My essay about Pond Station was included in a 2016 Sounds Remote booklet, published by Uniformbooks: