Uncovered is a sound installation where a “cloud” of umbrellas showers listeners with narrow beams of sound.

For the Headscapes exhibition in Long Island City, 25 artists were asked to create physical manifestations of the “head space” where we go when we create new work. The variety of responses was astonishing.

I’m often inspired by sounds that fall outside the circuit of human communication – sounds that occur around us but not for us. Natural soundscapes are full of activity that is not intended for our ears (like animal vocalizations) or produced without intention at all. (The organized structure of termite mounds is caused by countless interactions between individuals who share no intentional plan.) We are free to engage with biological sounds on a variety of levels; to ignore them, consider their aesthetic properties, or apply metaphors from our own experience.

In contrast, urban environments are constantly “speaking” in the language of commerce: Storefronts, signs, trucks, and t-shirts all have something to say. Neil Postman’s words about the telegraph resonate with me:

“For the first time, we were sent information which answered no question we had asked, and which, in any case, did not permit the right of reply.” (from Amusing Ourselves to Death)

Uncovered is my attempt to inject some aural diversity into the semantic chatter of the urban soundscape. A cloud of rain umbrellas hangs overhead. Tiny speakers mounted in two parabolic umbrellas project beams of directional sound toward the floor. Their convergence is marked by a hanging spotlight. When a listener steps into the light they are immediately surrounded by the sounds of cicadas, lapping waves, frogs, and crickets (sourced from field recordings I’ve made around the world).

I imagine the umbrellas floating through the air, propelled by the wind, picking up sounds and depositing them in distant places. I don’t intend the biological sounds to suggest a retreat from society. Instead, I hope the emergent complexity of animals can encourage us to examine authorship more broadly: If complex and beautiful sounds can arise from collective (or even unintentional) activity then why must our own society remain so fixated on the self? 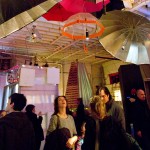 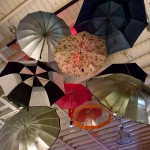 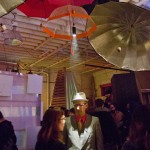 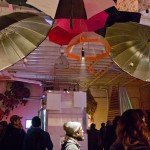 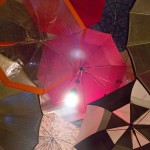 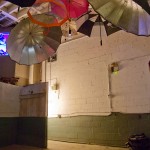 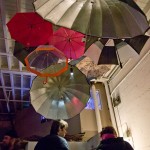