I’ve been looking into medium-range and long-range wireless audio for upcoming art projects, and I figured I’d try Bluetooth A2DP. The A2DP profile is a high quality (though compressed) stereo format in contrast to the standard low bit-rate mono profile that most people associate with Bluetooth. Cheap transmitters and receivers are common, so you could transmit generic line-level audio without involving a phone or computer. Since Bluetooth uses 2.4gHz frequencies, the range can be increased dramatically by using directional antennas on both ends (like a yagi or a “can-tenna” waveguide). Is Bluetooth reliable enough for a point-to-point link? Will it freak out when power fails (especially in a solar-powered situation)?

The transmitter and receiver must be put into pairing mode so they can connect. Then they will (theoretically) stay connected, but radio is inherently unreliable. When a connection is lost, some devices will re-initiate the link but others require user intervention. Each transmitter and receiver has a different user-interface for pairing, so it’s important to find the right combination of devices if you want to make a reliable unattended link.

The A2DP protocol requires data compression, so there will be quality loss. There are different codecs and bit-rates available, but most devices use the SBC codec with a medium bit-rate. If your input levels are decent then it should sound no worse than a medium quality MP3. (More expensive transmitters/receivers support higher quality options like aptX but I’ve never tried them.)

There will be a significant delay between the transmitter and receiver, due to the compression, buffering, and decompression of the signal. You won’t want to use Bluetooth for real time lip-sync applications. I estimate the delay is about a 1/4 second with the devices I’ve used. 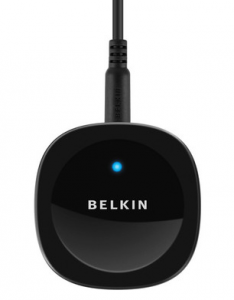 This device sounds bad with all transmitters. Do not buy! It applies a perplexing echo to the entire signal: a tiny slap-back delay like you might hear on your home theater amp if you turned on the lame DSP presets by mistake. Let’s call it “jazz club”. It makes everything sound jittery and slightly robotic. Before I returned it I recorded these audio samples:

from Pete Seeger’s “The Death of Harry Simms” 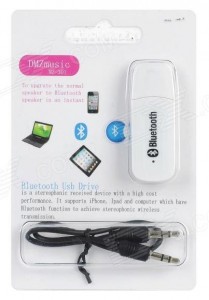 (DealExtreme is an online store that ships direct from China at near-wholesale prices. Stock is always changing so my links may break. Shipping is free but it takes about a month to reach North America. You might find the same items locally, sold under many different brands.)

These devices look like USB flash drives, but the USB plug only provides power – not data. They are all based on an OVC3860 bluetooth chip, and they all function the same way. Sound quality is fine: Much better than the Belkin above. I can hear the data compression inherent in the A2DP protocol but it’s no worse than a well-encoded MP3 file. It has a stereo 3.5mm line out without any digital noise or significant hiss. It lacks the current to drive headphones very well but it sounds fine when plugged into a mixer or recorder.

There is no internal battery. When powered by a 5v source, the receiver tries to re-connect to whatever transmitter it was paired with previously. If that fails then it makes itself available for pairing with other transmitters. (There are blinking lights and audible tones during this process.) If your transmitting device has a user interface (like a phone or computer) then you need to enter the password “0000”. Transmitters with no UI will usually try this password automatically. For example, the one below will automatically pair with these receivers if they are turned on and brought near each-other. This behavior means that an unattended link will generally work and automatically re-connect after power interruption. (Be aware that if one device loses power then the other device will try to pair with other things. So anybody could hijack your link if one side goes down! There is no way to prevent this.) 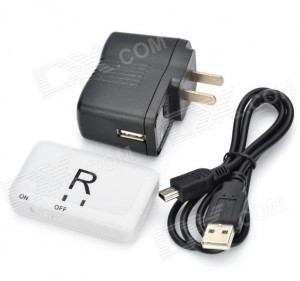 This battery-powered transmitter can be easily hacked to disconnect the internal battery so that it turns on whenever power is supplied: just pry it open and disconnect the battery wires. The power switch on the side actually interrupts the power (it’s not just a software switch).

This transmitter sounds fine and seems reliable. It pairs and re-connects automatically with the DealExtreme receivers above.