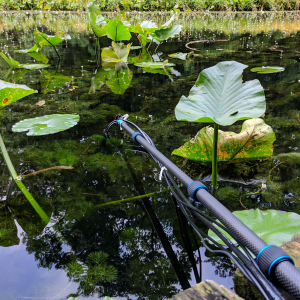 I’ve been experimenting with DIY hydrophones for years, slowly refining my designs until they meet most of my needs for applications like Pond Station. My sensors are very resonant; far from the neutrality and transparency of professional hydrophones. I’d like to complement my DIY kit with a pair of professional hydrophones with flatter frequency response, but reviews are scarce and the specs take some effort to decipher. This page is my attempt to gather advice about selecting and using a hydrophone for field recording. Scroll down for a table of commercially available hydrophones, prices, and specifications.

I classify hydrophones on a spectrum from resonant to flat. (All transducers resonate at a certain frequency, but in this case I mean that they resonate within the audio band.)

Resonant hydrophones are typically DIY types with a piezo disc on the end of an air cavity, dipped in a waterproof coating. They usually ring sharply in the midrange, accentuating those frequencies while attenuating others, especially frequencies above resonance. (In the table below, I noted if a hydrophone is resonant.)

Flat hydrophones usually use expensive PZT ceramics encapsulated in molded rubber with a preamp integrated into the sensor. These resonate at ultrasonic frequencies, but they’re frequency response is quite flat throughout the audio range. They’re less sensitive, so the results tend to be noisier if recording very quiet sources. (Most of the hydrophones in the table below are reasonably flat.)

I think of hydrophones like musical instruments rather than instruments of science: I’m not interested in capturing an objective recording of the underwater soundscape (if such a thing is even possible), but rather highlighting the certain details that are relevant to my interests.  Like microphones, different hydrophones are suitable for different things. The mid-range “honk” of a resonant hydrophone may be unrealistic, but if it overlaps with a frequency of interest then I would consider the resonance as “free gain” to lift quiet sounds above the noise floor. With creative EQ I can decide how much resonance to keep, though the results will never sound as natural as a flatter hydrophone. If I’m recording signals that are loud and wide-bandwidth, I would much rather use a flat hydrophone since I’m less concerned about gain/noise and more concerned about a balanced frequency response. If I’m listening to ultrasound (for research or to slow down for sound design) I would need to use a flat hydrophone rather than a resonant one.

Like contact microphones, all piezo hydrophones need a method to electronically match the high-impedance sensor to the low impedance microphone input of an audio recorder. (I’m highly suspicious of any claims that a passive hydrophone sounds good without a preamp.) Most professional hydrophones include some sort of preamplifier, either in the sensor itself (preferred) or on the recorder end of the cable (more susceptible to interference). These preamps vary widely in their noise performance and EQ characteristics, but they are all better than nothing.

The noise performance of a hydrophone and its preamp are difficult to measure since the recording system may also contribute noise at high gains. Noise is not linear along the frequency spectrum, so professional hydrophone self-noise is usually expressed as an SPL Equivalent Noise at a specific frequency: usually 1kHz (dB, re 1μPa/√Hz). Smaller numbers like “42 dB” are better than larger numbers like “55 dB”. Sometimes noise is expressed in relation to “Sea State Zero” which is the average noise floor of the ocean on a completely calm day. This translates to about 45 dB @ 1kHz, which from my experience is an unacceptable noise level for quiet freshwater environments.

You may need a longer cable than you think: I frequently dip hydrophones from piers that may be 10ft or more above the waterline. Sometimes there’s a railing that adds 5ft, and I might need a 5ft pole to extend away from the pier edge. I need to get the hydrophone at least 5 feet into the water for the best sound, so that’s a 25ft cable bare minimum. Remember, you can’t add more cable later because the connector would be underwater!

If you’re carrying around > 25ft of cable for each hydrophone, cable management becomes pretty important. For example, the Ambient ASF-1 uses stiff urethane-jacketed cable that looks like it would survive years of towing behind a research vessel. But it’s larger and heavier than my recorder and microphones! The ASF-2 uses a thinner cable, which seems a lot more convenient for field recording. Regardless, keep your cables in “ship shape” by coiling them neatly and never forcing them to twist in ways they don’t want to.

You’ll probably want a pole to get your hydrophone out into the water. Otherwise you’ll hear a lot of handling noise as your cable rubs against the pier/boat/fence. Often the water current will drag your hydrophone in an unwanted direction so a pole will help. A fishing pole is too flexible. A mic boompole or monopod is perfect. I use the removable column of a carbon fiber light stand (similar to the Manfrotto Nanopole). You can tape the cable to the end, or make some sort of fancy loop to hold it, like my 3D-printed cable hook with a 1/4″ tripod thread in the bottom.

Hydrophones are essentially contact microphones, so expect a lot of handling noise. Hold still, tie down your cables, etc. Some hydrophones pick up a lot of infrasound which can saturate the preamp or recorder. A high-pass filter is essential.

Everything is better in stereo, right?! Most hydrophones are omnidirectional in the audio band, so underwater mic techniques are basically limited to spaced pairs. Sound moves 4x faster in water, so a closely-spaced array of hydrophones won’t yield much stereo width. I start to hear nice stereo effects when the spacing is more than 3ft or so. Of course it all depends on your sources, their distances, and the desired scale of the recording. Sound travels very far underwater, so you will hear boats on the other side of a river while you’re trying to record tiny critters swimming next to you!

OK, not all of them, but here is a table of specs covering many hydrophones that seem appropriate for field recording, sorted loosely from insanely expensive to amazingly affordable. I tried to include the most popular options and a few exotic ones for perspective. Some hydrophones (Benthowave, Cetacean Research, HTI) are made to order, not stocked for delivery. You will need to request a quote and clarify your options for preamps, connectors, and powering. ALL PRICES ARE APPROXIMATE. Manufacturers can change their prices at any time.  Get in touch if I missed or mis-represented something!