With a simple hack you can use your old Mbox 1 as a standalone mic preamp!

Any long-term user of Avid’s Pro Tools audio software probably has a stack of obsolete hardware that won’t work with newer versions. Until recently, Pro Tools only ran on proprietary audio devices. Every few years we were forced to buy new hardware (with no added features) if we wanted to keep using Pro Tools. Lame!

I switched to Reaper. It’s an audio editor with more functionality than Pro Tools, but it’s free to try and cheap to buy. It doesn’t lock you into expensive hardware either, so I’ve been eying my original Mbox with disdain for a few years now.
(Avid/Digidesign abandoned the Mbox so there are no CoreAudio drivers for recent operating systems.)

The Mbox has two mic/line/instrument inputs and two balanced line outputs, so it can function as a simple stereo mic preamp with phantom power. It’s not the most noise-free or transparent preamp in the world, but it gets the job done, and it runs off 5V (via USB). If you plug it into a computer it will work immediately (as a mic preamp only, not as a USB audio interface or AD converter). You don’t need to install any software.

But, the Mbox will not work if you plug it into a USB charger or other 5V power supply. (Lights turn on but no audio passes through.) No amount of trickery with resistors on the data lines will help. This is actually proper USB device behavior: The Mbox must wait for the computer to approve its request for full power before it can enable the audio portions of the circuitry. It needs to be connected to a real computer to get permission, so it limps along forever when plugged into a USB charger.

I really wanted this tale of planned obsolescence to end happily, so I traced as much of the circuit as I could understand and discovered a very simple solution:

How to modify your Mbox 1, step by step:

1) Remove 2 screws and take off the right side of the case.
(It will hinge at the top where it’s internally glued. Peel and cut the glue.) 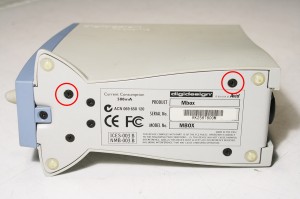 2) On the main circuit board, find the chip labeled U23. It’s an HEF4094 shift register (datasheet) that takes serial instructions from the Mbox’s microprocessor and switches parts of the circuitry on and off.
(If you’re following along on the datasheet, note that the chip is oriented upside-down on the board.) 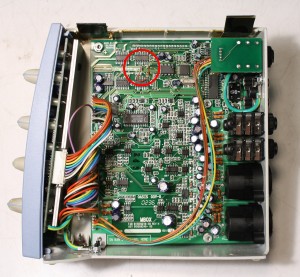 3) We will add a jumper wire to that chip: 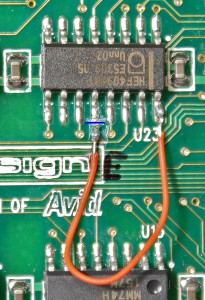 First, use a sharp knife to cut along the blue line in the picture, severing the trace between pin 12 and the tiny circle below it (which is called a “via”). You need a steady hand to avoid the nearby traces. Use a meter to test continuity so you can be sure you’ve completely cut the connection.

Now, gently scrape any insulating lacquer off the via and solder a fine wire to it. Be careful not to flex this wire too much because you don’t want to damage the via!

Solder the other end of the jumper wire to the lower right pin of the chip, as shown in the photo. (This is pin 16, the chip’s positive power input.)

Explanation: Pin 12 of the HEF4094 drives the “enable” pin of several MIC5205 voltage regulators (datasheet) which power the audio circuits. When you plug in the Mbox, the microprocessor tells the HEF4094 to keep pin 12 grounded (audio circuits disabled) until the computer grants permission for full power. Then the HEF4094 brings pin 12 high and audio turns on. Our jumper replaces this logic, forcing pin 12 high all the time so audio is always on.

4) Test it and put it back together. Now your Mbox will run without a computer. You can use any USB charger, 5V power supply, or a battery pack with a USB output.