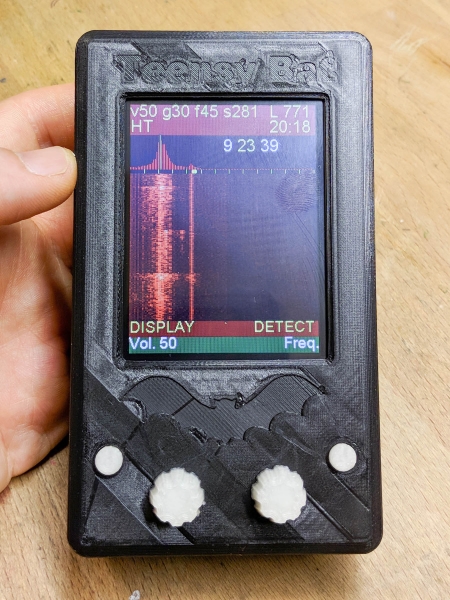 ltrasound has fascinated me for a long time (see my other pages about ultrasound recording and microphones), and I’ve been observing urban bats in NYC for several years. I’m fascinated by the urban wildlife that coexists with humans and particularly interested in making unheard voices accessible by playing them back at slower speed (AKA “time expansion”) so the fast details of their vocalizations and echoes are preserved.

Bat detectors translate ultrasound signals into audible sound, and they range in cost, complexity, and sound quality. The affordable models are usually heterodyne or frequency-division types, and only the expensive ones offer time expansion modes. Enter the Teensy microcontroller (like a super-fast Arduino) which has an audio library containing built-in modules for recording, analysis, and synthesis. The optional Audio Shield has an ADC that can be overclocked, so the building blocks are in place for inexpensive live ultrasound translation & recording, with a nice UI too! Thanks to the efforts of several Teensy forum members, I can now listen to my very own Teensy Bat Detector!

Everything you read below applies to the older Teensybat boards that were designed for the Teensy 3.6 micro-controller. This info is obsolete because the current Teensybat boards are very different. See teensybat.com for current info.

There is no onboard battery charger, so I added an Adafruit LiPo Backpack with slide switch between the Teensy USB power and the rest of the circuit, using these instructions. When plugged in to USB, it charges an attached Adafruit 2500mAh LiPo battery. Everything fits under the main PCB via standoffs included in the 3D-printed lid. The charger fits under the switch so the charge status LEDs are visible through the switch port in the case.

On the Adafruit charger board:

On the Teensy itself, cut jumper on bottom of board that connects Vin to Vusb

On the Teensy Bat PCB you should cut the RTC battery post flush with the board so it doesn’t interfere with the charger mount.

Edwin provides a detailed component list in his build guide (see links above), but here are some additional things to consider:

Edwin’s PCB is designed to fit a common project box available on Amazon, but I used OpenSCAD to create a 3D-printable enclosure instead (see links above). The dimensions are easily customizable and it includes optional features on the lid to hold the Adafruit charger board and battery. It has openings for all ports, and there are matching button caps and knobs for the encoders. (I used fancy glow-in-the-dark PLA for them!) The enclosure has a 10mm hole for the mic port, and I included 2 different horns (90d and 45d) to increase sensitivity and directivity (see Edwin’s docs for horn recommendations).

Hopefully your 3D printer will do a better job than mine. Looks like I need to tighten my belts!