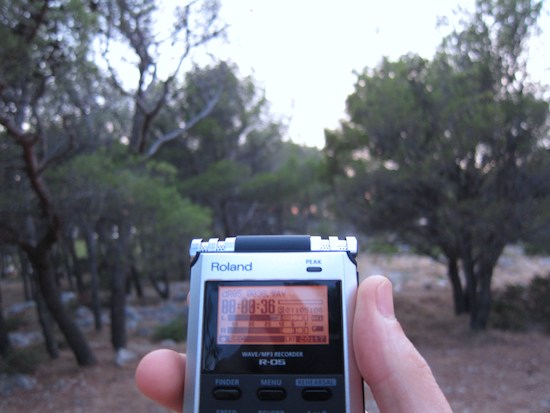 Many portable recorders offer high sampling-rates (96kHz or 192kHz) so they can theoretically record frequencies many times higher than humans can hear.

I wondered if the built-in omnidirectional mics were sensitive to these frequencies, and it turns out that they are. (They capture plenty of ultrasonic overtones when I jangle my keys nearby.)

I happen to be in an area with a lot of bats right now and I always enjoy watching them swoop and dive after sunset. Their ultrasonic calls evaded my human ears, though. Bioacoustics researchers and hobbyists use portable bat detectors to lower their pitch into the human hearing range in realtime. I tried a quick test with the R-05 recorder, to see if it could record enough information to slow down in post-production. I think it worked well, considering the humble technique (point recorder at sky, wait for bats, record)!

These recordings are slowed to 10% of their original speed, so the 40kHz bat calls are now 4kHz. I rolled off the low bass and added some limiting to bring up the background sounds a bit.

A medley of bats and probably other sounds:

A series of quick “FM” chirps used for hunting at close range?:

I think the 40kHz chirps are probably the social calls of Brown Long-Eared bats (Plecotus auritus) based on the samples from Avisoft Bioacoustics. (Also see this great Wikipedia article on bat species identification.) There are some loud chirps at a lower pitch too, which you can hear in this recording (not sure what they are): 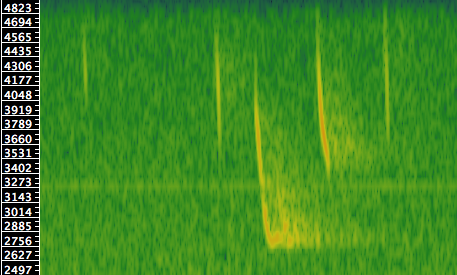 The spectrograph shows the last few seconds, where 4 “normal” 40kHz calls are interrupted by a louder, lower double chirp around 28k and 36k.

There is a consistent background whine in every 96k recording I’ve made with the Roland R-05, which you can see in the spectrograph above. It’s centered at 32,770 Hz. It persists with the LCD backlight on or off, with or without Plug-in-Power enabled.  (I haven’t tried using the line-in or external mics.) I don’t see any other obvious anomalies in the R-05’s ultrasound performance, but I have no way to test sensitivity and noise in the extended frequency range .

The sound artist Yannick Dauby wrote excellent notes about listening to bats in the process of creating an album and installation in 2015. Take some time to read and listen to all of his phonography resources.

I must give a quick credit to composer Alvin Lucier and his piece “Vespers”, where performers use electronic chirps to navigate blindfolded through the performance space. It always struck me as not only a fascinating soundscape but a Cagean challenge to the performers to practice a different kind of listening. From the 1968 score:

Richard Mudhar of the Wildlife Sound Recording Society has an excellent page of ultrasonic bat recordings, as well as a low-cost guide to recording ultrasound.

On my Cheap Microphones for Ultrasound page I have done some formal testing of inexpensive mic capsules (like the ones inside the handheld recorder I used for the above recordings). My results show that many cheap electret mics can capture useful ultrasound. 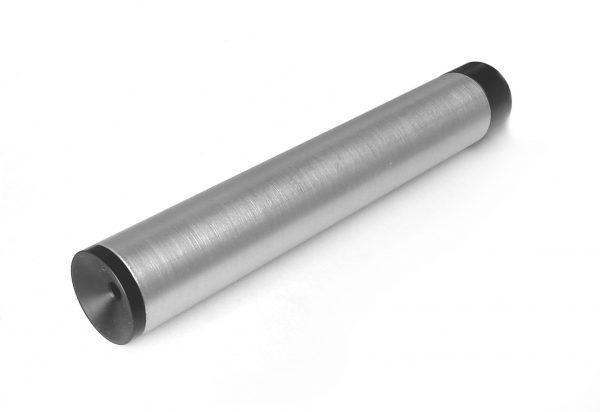 Full-spectrum recorders like the Dodotronic Ultramic series can capture much higher frequencies than conventional audio recorders. They connect to a computer or tablet via USB. Some recording apps support live spectrographs and pitch-shifting. 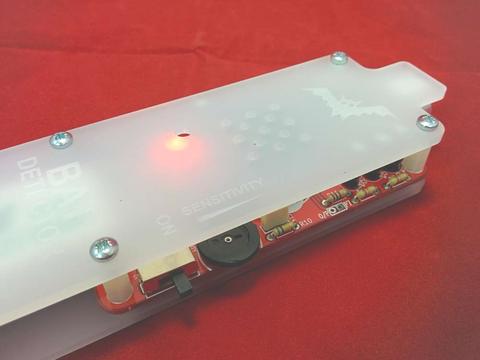 A bat-detector used alongside a recorder will tell you when something is worth recording. This kit from Curious Electric works great.
Remember that simple bat detectors just generate ugly clicking noises in sync with the bat vocalizations. To get results like you hear above, you need to record at high sample-rate and slow it down in post.