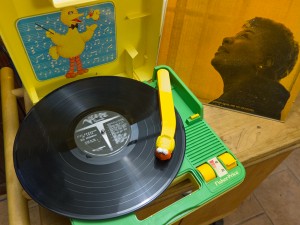 I got a Fisher Price #816 battery-powered phonograph from 1983. It played fine for a week and then the speed started to intermittently increase to “chipmunk” without warning. Moving the volume control to certain positions also effected the speed. No fun! A few years later, the sound kept cutting out intermittently. Where’s the fun in having a Sesame Street record player if the cartridge won’t work? Here’s what I did to fix both problems:

I took it apart and found that the player has an electronic speed control, with trim-pots to fine-tune the 33 1/3 and 45 rpm speeds (VR1=680Ω, VR2=5kΩ). When I poked at the trim-pots the speed went crazy. They were probably oxidized. I marked their positions and swept them back and forth a few times to clean their tracks. That totally fixed the speed problem so I returned them to their marked positions. I recommend using a strobe light (or any neon lamp) and a printable strobe disc to re-calibrate the speeds. UPDATE: Every year or so the speed problems returned (fixed by cleaning the pots) so I eventually replaced them with modern multi-turn trimmers. (blue ones in photo) I used these values: VR1=1kΩ, VR2=10kΩ and had no problems calibrating the speeds accurately. 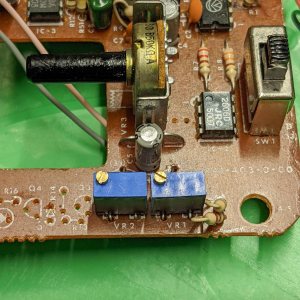 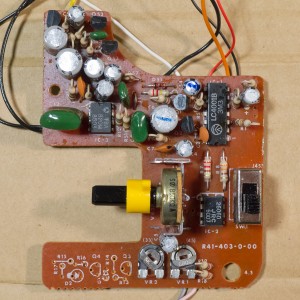 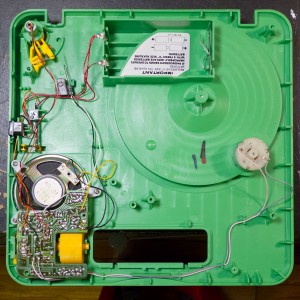 I was surprised to find that my player had an internal switch that was activated when the tone-arm moved to the lock-groove at the end of a side. Strangely, this switch had no effect on the motor or amplifier (Instead it spun endlessly, depleting the battery). I’m not sure what this switch was intended to do, so I jumpered its pads on the PCB and rewired it as a power cutoff. The pictures on this page shows the wiring before my modification. (Sorry, I didn’t document it.)

At first I thought it was just a scratchy volume pot, but cleaning didn’t help. Then I cleaned the contacts on the socket where the cartridge mounts to the tone arm. That didn’t help either. I got a replacement cartridge (Pfanstiehl 911-D7) but it didn’t make any sound at all! Clearly something was wrong with those contacts so I took apart the tonearm to get to them: 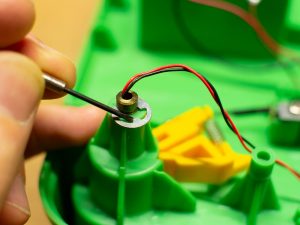 First remove the bottom of the player and set aside. Flip over the top deck and locate the brass shaft that holds the tonearm. Remove the e-clip and slide out the tonearm shaft.

(It will be limited by the length of the delicate tonearm wires. You can do this repair without disconnecting them, but it’s easier/safer to desolder them and put them back when you’re done.)

Unfortunately, the tonearm is 2 pieces that are glued together. Carefully cut along the seam to separate them.

(I have the #816 Sesame Street version. Perhaps the normal #820 version uses screws instead?) 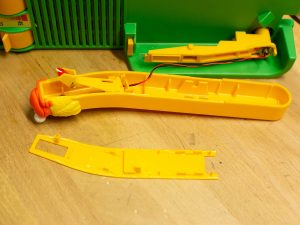 Now you can see the sub-assembly that holds the cartridge in place. The tonearm has a fulcrum in the middle with a stop, so the weight of the heavy arm is never applied to the record. The arm rests on it’s stop, a few mm above the record surface and a spring pulls the cartridge assembly down toward the record, applying the tracking force. 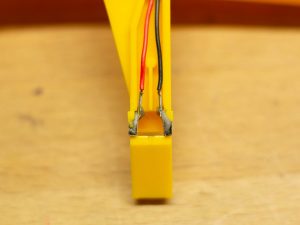 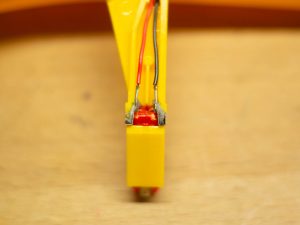 Two steel clips grab the contacts on the end of the cartridge to connect  to the tonearm wires. In my case, the clips looked fine but they weren’t squeezing the cartridge enough to guarantee reliable contact. I added tiny pieces of foam tape under the contacts to tighten the connection. Now both my cartridges work reliably!

(These pictures show the clips after my modification. I didn’t take “before” photos.)

This Old Toy has info about Fisher Price phonographs