I started experimenting with inexpensive DIY hydrophones awhile ago (documented here). My first pair were Panasonic WM-61a electret capsules encapsulated in silicone, based on ideas from Mike Rooke’s Lab Blog. There were a few things I’ve been meaning to explore since then, and now I finally got around to it. What follows are my tests and observations, but I don’t have the means to do objective measurements.

Mike Rooke recommended harder encapsulation in his Hydrophonia 2009 post about DIY hydrophones.  I wasn’t sure if that advice only applied to piezo discs, so I tried encapsulating an electret in hard plastic. It seems that the diaphragm was too restricted, because the output was much lower than with silicone encapsulation.

Conclusion: Stick with silicone or soft rubber for electret hydrophones. 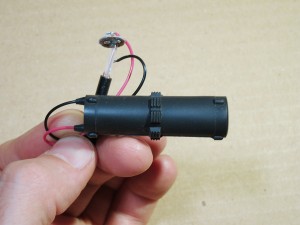 After years of extensive hydrophone experiments, Mike Rooke concluded that modifying commercial fish-finders or raw hydrophone elements has advantages over making a hydrophone from scratch. This advice resonates with me, since I’ve spent a lot of time tinkering with DIY projects that are never quite finished. (How much is our time worth, anyway?)

With this in mind, I bought a Teledyne Benthos AQ-2000 hydrophone element. It’s a commercial hydrophone with good frequency response (+/- 1.5 dB between 1Hz – 10kHz ) and it needs a FET impedance converter. I used a low-noise FET extracted from an EM172 mic capsule and tested it alongside a hydrophone made from a WM-61a capsule.

This clip alternates between 5 sec. AQ-2000, then 5 sec. electret, scraping bolts together in a small bowl:

Conclusion: The AQ-2000 is noisier, but has better high-frequency response. 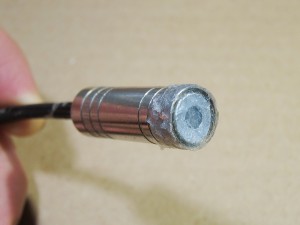 Primo EM172 capsules are low noise electrets – much lower noise than the Panasonic WM-61a caps I used for my original hydrophones. I built a test pair with one WM-61a and one EM172 mounted close together, both encapsulated in silicone.

First I modified the EM172 front case to allow more contact between the silicone and the diaphragm. (The stock capsule has very small holes in the front casing, which wouldn’t allow the silicone to penetrate.)

These clips alternates between 5 sec. WM-61a, then 5 sec. EM172, recorded in shallow salt water. The dominant sound is snapping shrimp.

A quiet location, where you can hear the difference in the self-noise of the capsules:

A much busier location (peak-limited to bring up overall levels):

While recording, I noticed the following:

Conclusion: EM172-based hydrophones are harder to build and have less HF response, but in quiet locations you will hear the noise difference compared to a WM-61a.