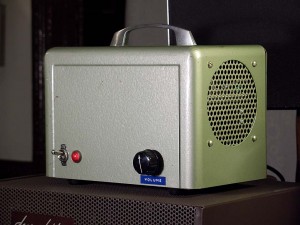 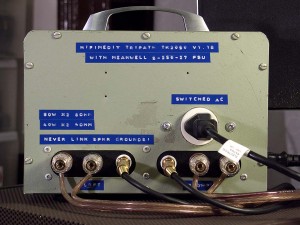 Audio amps have changed a lot in recent years with the introduction of Class D “digital” amps which operate their output transistors in fully off/on mode instead of the more typical “linear” mode. Compared to traditional amps they generate very little heat, and many have compared their sound quality to single-ended tube amps. (This seems totally ironic if you’re familiar with how these amps work.)

A company called Tripath made some of the best chips using this new technology (marketed as “Class T” amplifiers or “T-amps”) until they went out of business in 2007. Their chips are still easily found, and a few companies make amp kits or pre-assembled units based on them or their modern cousins (not an exhaustive list):

This thread on the diyaudio forums discusses some Tripath-based amplifier boards made in China by Y. Yubing (AKA “hifimediy”) which are inexpensive and well-built. I bit the bullet and ordered a TK2050 board (Revision 1.1B) and a Meanwell 24v switching power supply from the website of his distributor. It shipped from China and arrived OK. It sounds fantastic and includes a volume control, so I retired my preamp and started looking for a nice housing. 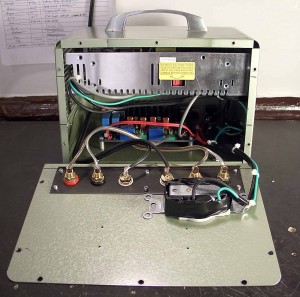 The winner was an old broken Moviola “Squawk Box,” a portable amplifier for the magnetic sound pickups on the film editing machines of yesteryear. (They’re also modded into guitar amps occasionally.) I had to get creative to fit everything in (including a switched AC outlet for accessories like an EQ or phono preamp) and I went for the full Dymo-labeled old-fashioned mad scientist look. I kept the big red power light and used the old speaker grill for cooling.