Recently I was working on a hydrophone project and I needed to figure out how to disassemble an electret capsule and put it back together without ruining it. Robin Whittle has great photos, explanations, and specs concerning some specific capsules on his page “Dismantling four Transound electret microphones” and Open Music Labs has a thorough explanation of the parts and theory, so I jumped in and started hacking:

There are two capsules covered in this guide: The Panasonic WM-61a and the Primo EM172.

These steps don’t really cover re-assembly but I think you could just epoxy it back together afterward.  I haven’t tried because I wanted to disassemble a WM-61a to harvest the internal impedance-converter FET so I could use it in other applications. Use sharp diagonal-cutters to snip around the rolled edge of the casing that holds the rear PCB in place. The aluminum is soft so this should be easy. If your wire-cutters are too dull, a sharp razor blade would probably do it, but you’ll have trouble clamping it safely without deforming the capsule. (Don’t hold it with your hands! You’re sure to lose a finger that way.) 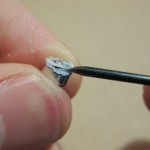 Using a small flat screwdriver, lift the PCB off the back of the capsule. 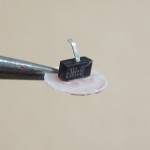 Remove the FET if you need to. The long lead is the Gate, which makes contact with the electret backplate when assembled. The Drain and Source leads are soldered through the PCB to the contacts on the other side. 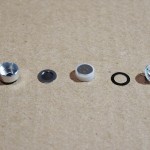 Tap the case until the innards slide out. Now they are ready for whatever new future awaits them.

I needed to enlarge the front opening of this capsule so I could encapsulate it in silicone and use it as a hydrophone. This mod makes the mic sound terrible in air, but it allows the silicone to more completely contact the diaphragm, which is crucial underwater. Snip around the rolled edge but leave some sections intact so you can crimp these “fingers” back down later when you re-assemble the mic. 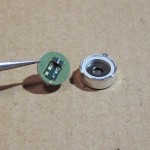 Remove the PCB with tweezers 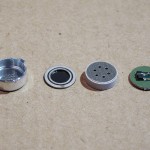 Tap the case until the innards slide out. Now we can modify the front of the case. Use a knife to cut away the existing holes, then drill it out and carefully de-burr the edges on both sides of the hole. Re-assemble everything and crimp the leftover “fingers” over the PCB. Seal the edges with epoxy so it’s air-tight. 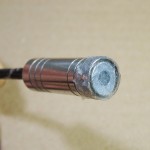 I potted the capsule in epoxy and covered it with silicone to make the finished hydrophone.