In 2002 I built 36″ parabolic speakers to produce directional “beams” of sound for a piece called Search Signals. My technique involved making a plaster mound and “skreeting” it radially with a parabolic form until it formed a suitable mold. After some sanding, sealing and a coat of mold-release it was covered with many strips of fiberglass dipped in polyester resin. The result is smooth on the inside and works great at mid to high frequencies. (All parabolic reflectors have a cutoff frequency below which their directivity rolls off. The larger the dish the lower the frequency.)

As I was brainstorming for my Uncovered installation I really wanted to use umbrellas as the sole sculptural objects in the piece, but my ideas kept gravitating toward directional sound. Why not try to use an umbrella as a sound reflector? I scoured the web and found very little trustworthy info. (Apparently it’s been tried before for microphones but the results seemed pretty lame to me.)

I tried a 34″ clear plastic “bubble” umbrella and a 60″ golf umbrella. Both had a mild sweet spot but nothing like the focal point of a true parabolic reflector. (My test methodology involved a tweeter on a stick that I moved along the umbrella shaft while playing white noise.) Then it hit me: Photographers use parabolic umbrellas as high-efficiency reflectors. They provide diffusion while still giving the “throw” of a focused light source. 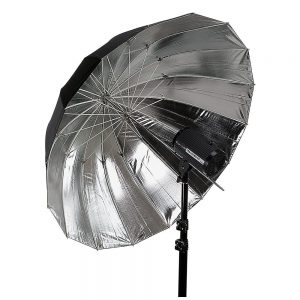 I did some quick tests at Adorama (much to the amusement of the staff) and left with a pair of 60″ parabolic umbrellas. Eureka! They work great at high frequencies (actually more focused then my fiberglass reflectors) although they don’t extend quite as low into the mid-range. (I considered spraying the back with a liquid rubber (like RustOleum LeakSeal) to add mass but there was no time.) Overall they are really effective audio reflectors, and portable too!

For the speakers themselves, I glued 3″ drivers into PVC pipe ends and attached them to the umbrella shafts. A high-pass filter was applied to the recordings and EQ was tweaked to taste. You can hear them in action here.