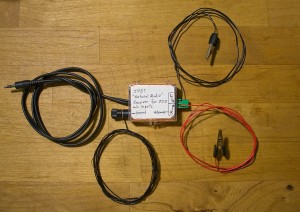 VLF (Very Low Frequency) radio waves vibrate at frequencies that overlap the human hearing range, although we can’t directly hear them. (Our ears sense physical waves rather than electromagnetic ones.)

VLF radio is filled with “natural radio” emissions. Every lightning strike creates a radio pulse that can travel thousands of miles, bouncing between the Earth’s surface and the ionosphere. The radio energy can be translated into sound by sensitive audio amplifiers and short antennas. They inherit audible artifacts of their electromagnetic journey, and natural radio fans use the terms “sferics”, “tweaks” and “whistlers” to describe them.

The biggest man-made VLF emission is the constant hum of the electrical grid (60Hz or 50Hz) which limits natural radio listening to rural or wilderness areas. There are also submarine navigation and communications systems using VLF because the long waves penetrate deep underwater.

The best VLF recordings I’ve ever heard were made by Stephen P. McGreevy. Stop reading now and listen to them! (He also sells VLF receivers if you don’t want to make your own.)

In typical radio listening (like AM, FM, and shortwave), you tune the receiver to a radio frequency that is much higher than the human hearing range. The receiver demodulates this high-frequency signal to recover the sound that was embedded in it. VLF receivers are much simpler, and not really “radios” at all. They simply translate electromagnetic waves into sound … literally a bare wire feeding a high-gain audio amplifier! (Actually there are 2 types of VLF receiver: E-field and B-field. I’m mostly discussing E-field.)

The INSPIRE project offers a VLF receiver in kit form, with field-proven amenities like filters and a built-in headphone amplifier. (They also have great general info on VLF phenomena.) Others are available either pre-built or as kits.

The Bike Loop is a (b-field) antenna and receiver combo built by Roberto and Claudio Parmigiani (IW2FER), Gabriele Seleri (IW2DWN). The antenna is made of bicycle rims!

I built a stereo pair of the “Super-Tiny VLF Receiver” designed by Charles Wenzel (www.techlib.com). It’s incredibly simple (3 parts!) and runs on “plug-in power” provided by most small flash recorders. 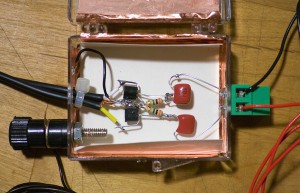 Here is a short sample from Grand Manan in the Bay of Fundy.

Notice how the loud sharp”sferics” and the occasional pitched “tweaks” mask the quiet wooshing “whistlers”.

sferics reduced with Izotope RX De-ckicker, so the whistlers are more audible

filtered to highlight the whistlers and the constant man-made transmissions (naval MSK messages?)

In 2012, a NASA satellite recorded a very clear VLF radio “chorus” from outside the earth’s atmosphere.