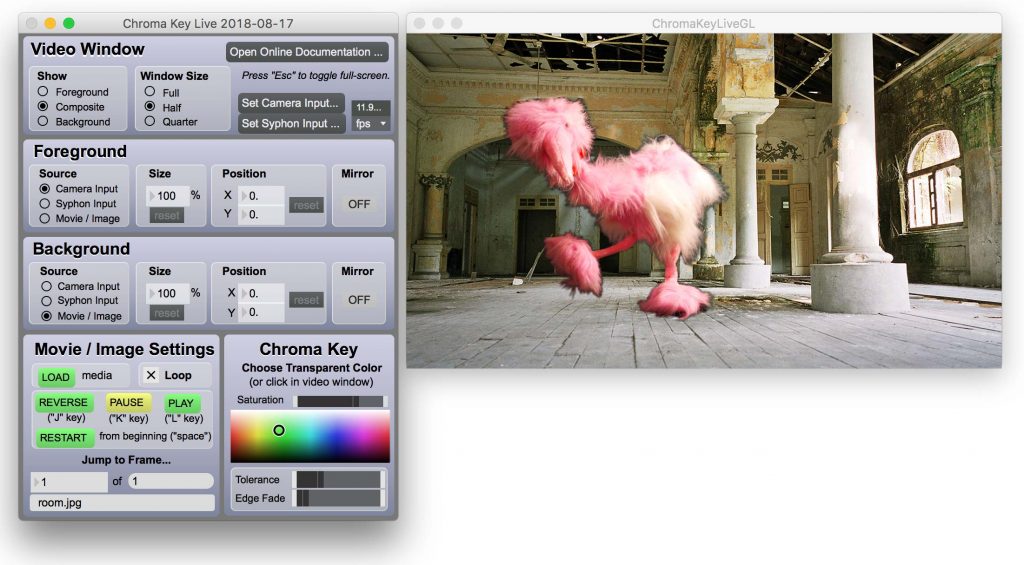 A few years ago, some of my students were doing a green-screen shoot and needed to visualize the chromakey while shooting, so their actors could see the composite while they performed. We didn’t need the advanced features of professional software like Veescope, Wirecast, MimoLive or VirtualEyez so I made my own solution. (There are other free solutions: OBS Studio has a chromakey filter built-in. CamTwist Studio has a chromakey feature, but it’s buried pretty deep.)

Chroma Key Live performs a basic realtime chromakey (AKA “greenscreen”) on your computer screen, in HD resolutions, with adjustable tolerance and edge fade. The foreground / background sources include FaceTime cameras, USB webcams, HDMI capture cards, Syphon streams, and pre-recorded movies or stills. (See the Camera Compatibility page for complete info.) The foreground and background layers can be independently scaled, positioned, and mirrored (so your actors don’t see themselves backwards). Movie playback can be controlled from the keyboard for easy cueing and rehearsal. The keyed output is published as a Syphon stream for other applications to use.

In the days of analog video, chromakey was accomplished in the TV studio in realtime. The camera’s live signal would be routed through a keyer in the control room and delivered back to an on-set monitor. This way, the production team could see exactly how the actor looked when composited over the background image. (Assuming you could afford the expensive studio or at least a video mixer.) Now chroma key effects are included in every editor, but they can’t be easily visualized during production. How do you shoot a complex green-screen scene when all you see is an actor against a big green wall?  Chroma Key Live makes it simple again. Run the output from your camera into a Mac, then click on your background and it will disappear, revealing the movie or still image of your choice. Switch to full-screen and call “action!”