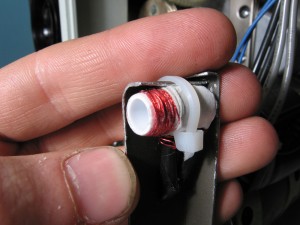 When I studied film in college we were required to finish on film. For critiques, we used an old Siemens double-system projector. On a double-system projector you thread your film on one side and your mag soundtrack on the other. The sides are geared together to ensure sync sound throughout the film. This assumes you have cut everything on a Steenbeck and mixed your audio onto a single strip of mag.

In the shiny new millennium, it is hard to find mag equipment or a double-system projector, so that workflow can be problematic. (also, mag film sounds awful!)

So, I made software that monitors the speed of our projector and tells the computer to “chase” it with your synchronized soundtrack. This means that you can show your work on real film with stereo sound. (Provided that you are willing to do a little tinkering.)

Note: There is no absolute time-code in this system, so you must start the sound playback manually at the beginning of the film. It’s kind of fun, actually!

Changes in this version

Read the Film-O-Sync Guide to get started.
You may need to adjust your security settings and/or install Java. See Installation Instructions.

There is no Windows version (details).