MultiScreener is a set of free applications that synchronize the playback of Quicktime movies on multiple computers, using a local network to tie them all together. (It can also sync multiple movies on the same computer using multiple monitors.)

Note: If you are planning on buying new equipment for multi-channel playback I suggest buying Andor 1 players or BrightSign players instead. They are cheaper and more reliable than computers. (See below for links.) MultiScreener is a great solution if you already have Mac computers, but it’s getting very old! 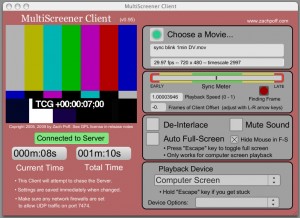 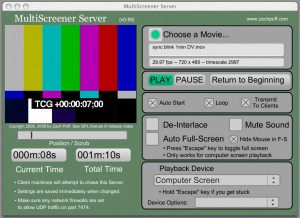 There is a Server and a Client. The server plays a movie and also sends position information over the network. Each client “listens” to the server and subtly adapts its movie playback speed to stay in sync. There is no limit to the number of clients.

Originally, I assumed that each client would run on its own machine, but you can also run multiple clients on the same computer, with each client feeding a different monitor.

Looping and de-interlacing are available, and all settings are automatically saved for unattended startup. MultiScreener can output to the computer screen or external video devices (like DV cameras or decks). There is no native resolution or frame-rate, so all Quicktime video formats are supported.

If MultiScreener Doesn’t Do What You Want

Feb 03, 2009, 24MB with source “patches” for MAX/MSP/Jitter 5.
NOTE: The auto-startup Applescripts included in the download won’t run on modern Macs.
Updated ones are here.
Please read the MultiScreener Guide for instructions and a detailed Changelog.
You may need to adjust your security settings and/or install Java. See Installation Instructions.

Changes in this version:

Known Bugs in this version:

I’m amazed at the scope of MultiScreener users who have contacted me. From a small flamenco festival in Spain, to the Museum of Modern Art, and plenty in-between. Here are some of them:

Have you used MultiScreener for something interesting? Let me know and I’ll link to your work here.