This guide is the instruction manual for my motion-activated audio player software, Video Trigger.
(Click the link for screenshots, features, and latest download.)

You’ll need a stationary camera (tripod recommended). See the camera compatibility page for supported cameras and video input devices. You must use manual exposure if you want Video Trigger to be reliable! It will work with auto exposure, but if something bright enters the frame then the camera will automatically darken the image. Then all of your motion-detector zones will trigger and you will be unhappy.

Performance is only as reliable as your lighting. If you turn off all the lights then you will trigger all of your zones. However, there is an “adaptive background” mode that compensates for slowly-changing lighting. See “Background Image Settings” below. If you absolutely can’t control your lighting, consider using infrared. Some webcams can be modified to respond to IR instead of visible light. Then you can illuminate your area with IR LEDs and thus control your lighting.

On the left side you’ll see buttons for Video, Sound, and Script settings. 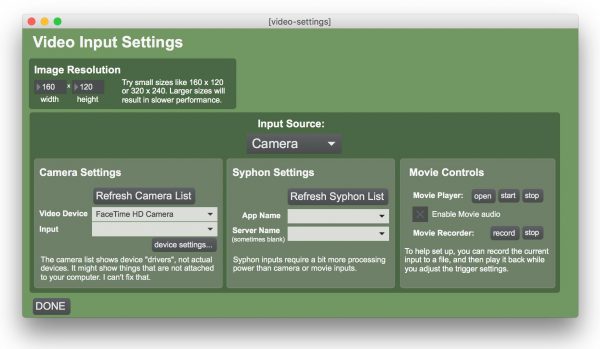 Image Resolution: Use the lowest resolution that is practical for your project because larger sizes result in slower performance. I usually use 160 x 120 or 320 x 240.

Camera: The first camera connected to your system is usually selected by default, and you can select other cameras using the drop-down menus.

Syphon: Syphon is a framework that enables realtime sharing of video data between compatible applications. You can choose a feed from any Syphon server using the drop-down menus.

Movie: You can record the current video input to a file and play it back later while you adjust the Video Trigger settings. If you’ve ever set up an interactive installation by yourself, you know why this is handy! If your movie has audio, you can enable/disable it here. 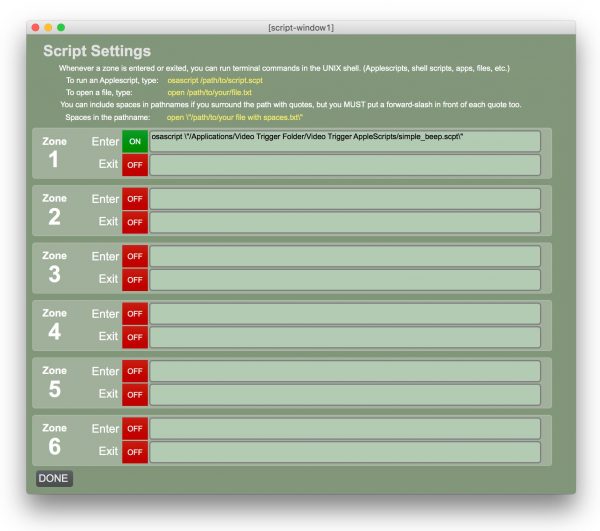 In this window you can define terminal commands and attach them to zones. Whenever a zone is entered or exited, your command will run in the UNIX shell. You can trigger an Apple Script or shell script, launch an application, open a file, etc.

You can include spaces in the path names if you surround them with quotes, but you MUST put a forward-slash in front of each quote too:

I included a “simple_beep.scpt” to get things started. It just makes the default system alert sound whenever it runs. Search the web for more things you can do with the Apple Script or the terminal, but be careful because some terminal commands can delete things or cause other damage! 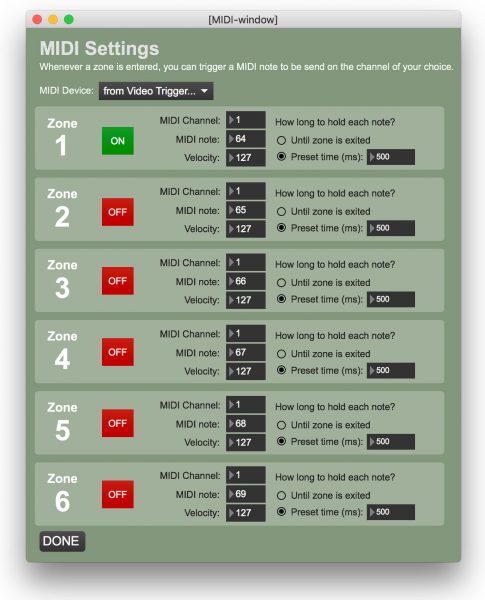 Each zone can send a MIDI note whenever occupancy is detected. Use this to launch clips in Ableton Live, send a trigger to your DAW, or just make music notes with the MacOS built-in synth!

Select your MIDI Device on top, then choose channel number, MIDI note number, and velocity (0-127) for each zone. The duration of each note can be adjusted, or you can make it sustain until the zone is exited.

Note: In Ableton Live’s MIDI prefs, make sure the “Track” and “Remote” boxes are checked for the “from Video Trigger” MIDI device, otherwise your notes won’t show up in the MIDI Mapper!

Video Trigger detects motion by comparing each live video frame with a stored background image. If they match then nothing gets triggered. If they mismatch enough then a zone gets triggered.

If you want the whole thing to shut up, press the green “Triggers ENABLED” button on the screen, or press the Esc key. None of your settings will be effected, but all sounds will stop and zones won’t trigger until the button is pushed again.

Setting Up A Zone

All settings are saved automatically to an xml preferences file as soon as you make changes. If you want to get really nerdy, you can edit the xml with any text editor (but Video Trigger doesn’t monitor changes in the xml while it’s running).

Video Trigger is designed for gallery installations where the computer will run all the time, or be turned-on daily. It makes sense to start Video Trigger from the Login Items panel in System Preferences/Accounts/(your username).

Video Trigger 2008 – 2018 by Zach Poff. It is Free Software, released under a GPL 3.0 license. You are free to copy it, modify it, and redistribute your changes provided that all derivative products remain GPL licensed. The source files are included in the download. (See http://www.gnu.org/licenses/gpl-faq.html for details about this license.)

It contains Syphon external objects which have a separate BSD license (full details included in download). It also contains the “Shell” external object originally created by Bill Orcutt, later updated by Jeremy Bernstein. http://cycling74.com/download/Share/JeremyBernstein/shellUB.zip License is unknown, but source files are included in the app package.

The software was developed in the (non-free) Max visual programming environment (http://www.cycling74.com) which is required if you want to edit the source code. My application contains the Max “Runtime” environment, which is not GPL, so my license pertains to my contributions only.