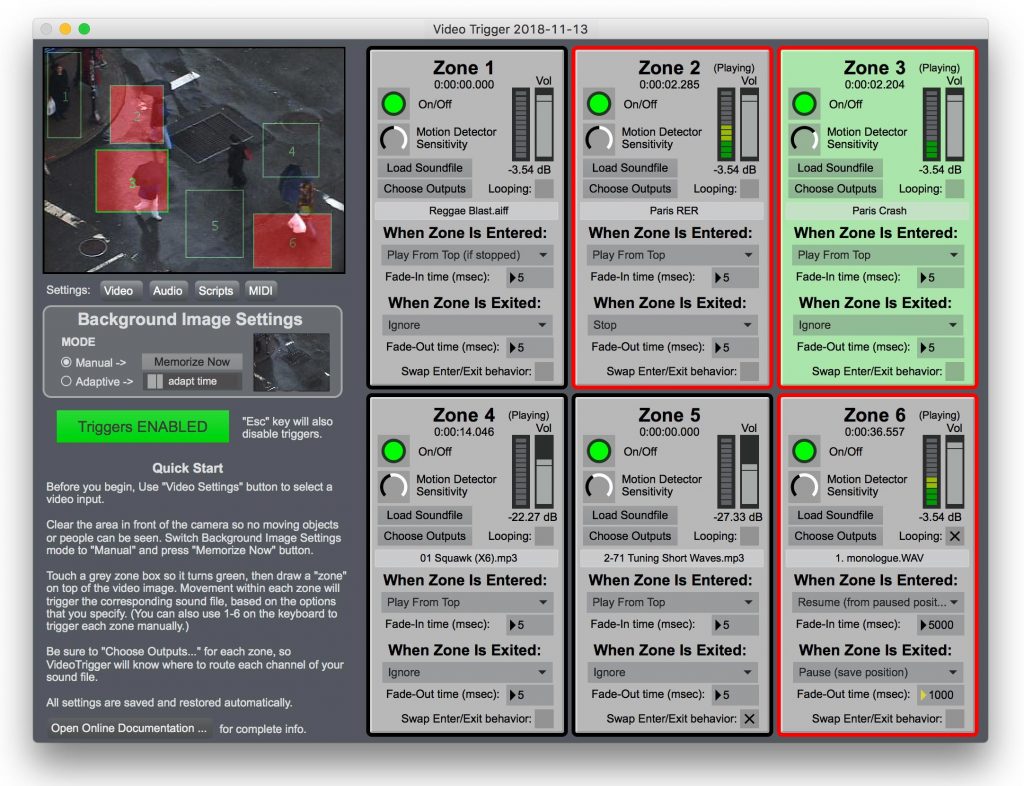 Attach a camera and trigger sounds whenever occupancy is detected in six user-defined areas of the video image. You have complete control over the playback logic and signal routing. Multichannel surround is supported. Video Trigger can also trigger shell scripts or AppleScripts, and send MIDI notes. If you want to trigger videos to play instead of sounds, see my other app, Video Triggers Video.

I designed Video Trigger for artists who want to experiment with interactivity without building custom hardware or software. It aims to answer the question that I hear from many of my students:

“How do I make a sound play when somebody walks by?”

The answer often involves micro-controllers (like Arduino) and sensors, or custom software (via Processing, pd, vvvv, Isadora, or MAX). In the long-run these options provide much greater rewards, but if you have modest needs, Video Trigger is a painless way to get started.

Video Trigger works with many cameras. It can play up to six sound files (AIFF or WAV, 1-16 channels) through any Core Audio sound hardware (1-16 channels) with complete control over signal routing.

Whenever a zone is entered or exited it can also run a terminal command of your choice (to launch an Apple Script or shell script, run an application, open a file, etc. )

Video Trigger is not security software. It won’t email you a video of somebody breaking into your house! Try iSentry, iSpy, BTV Pro, SecuritySpy, or Blue Iris.

VPT (Video Projection Tool) is a free app by HC Gilje that handles all kinds of complicated video projection tasks (cueing, mixing, effects, keystoning, etc…). He made a VPT extension based on Video Trigger so you can use a camera to trigger any VPT function.

Sometimes video motion detection is a complex and unreliable way to detect people. A simple floor switch or motion detector attached to a Sparkfun WAV Trigger, hacked computer keyboard or Makey Makey board could do the job nicely. Applications like the (free and wonderful) Soundplant will play sounds whenever a key is pressed, with fine control over the playback logic.

Read the Video Trigger Guide for instructions and a detailed Changelog.
See Installation Instructions. There is no Windows version (details).

Changes in this version: